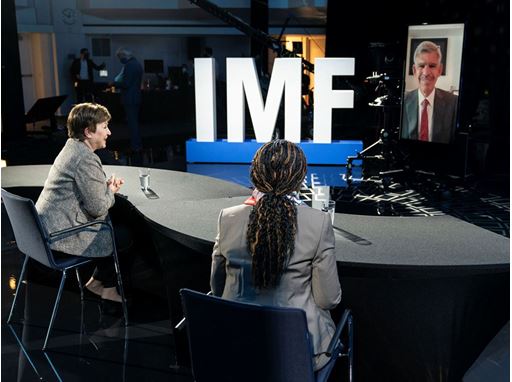 High-income countries may emerge from the COVID-19 crisis with very little scarring, while the developing countries’ economic outlook, particularly the poor of them, looks much worse. That’s what the IMF sees in its latest research.

On this topic and on how the world avoided a systemic debt crisis amid the pandemic, IMF’s Managing Director Kristalina Georgieva, joined Mohamed El-Erian, President of Queens’ College, Cambridge University, and Vera Songwe, United Nations Under Secretary-General and Executive Secretary of the Economic Commission for Africa in a panel to discuss averting a COVID-19 debt trap on Tuesday (April 6) in Washington, DC.

“We have some good news. But we also see danger, danger in divergence in economic fortunes of advanced economies and developing economies. So, why are people worried of a potential debt problem? They have reason to be worried. We entered the pandemic with high level of debt. And during this year and five months since we are in it, understandably, debt levels went further up. Why? Because revenues went down, and expenditures went up. Today, public debt globally is reaching 100 percent of GDP. Within this, advanced economies have jumped the most, nearly 20 percent. Emerging markets nearly 10 percent. Low income countries 5 percent,” said Georgieva

El-Erian stressed on the importance of avoiding the debt trap “because it feeds on itself” as it affects the growth momentum negatively as it gets higher.

“Now, we know that the best solution to this is higher growth, and that remains by far the most desirable solution. But as you just said, we also have to recognize that developing countries are facing significant headwinds. Tourism isn't going to come back quickly. Remittance flows aren't going to come back quickly. FDIs is going to become remain uncertain. And all this is happening in the midst of the pandemic. So, there is no easy growth path out of this in the short term,” said El-Erian.

Songwe highlighted how advanced economies learned from the past by putting $7 trillion of liquidity into the economies to ensure stability within the first three months of the crisis, but that sense of urgency has not been demonstrated in the emerging economies.

“First of all, I think SDRs release yesterday. Second, we do need more transparency so that we can understand how you resolve the debt. Third, we need the private sector to come to the table and come to the table, both in terms of reducing market access because countries are still going to need to go to the markets and finally, recapitalization of the MDB so that we get additional resources out quickly,” said Songwe.

Georgieva concluded the event by emphasizing the role of institutions like the IMF and the World Bank in enforcing transparency to the public, which is crucial to averting a COVID-19 debt trap.

“I feel very strongly that my institution has a responsibility to press very hard and together with others, with the World Bank and others, to make it so that this mountain of debt that is often hidden from the naked eye can be exposed, that contracts are disclosed and the conditions in this contracts, sometimes ridiculous, are for everybody to see. On Debt, I have a bit more hope that the situation now is becoming difficult to a point that countries that have been resisting transparency and actually on both sides are more open. This is a fundamental component. If we don't know what we are talking about, we can't fix it,” said Georgieva.